If sound quality is your priority, these are the wireless headphones for you

There are two ways that most people first hear the Audio-Technica name: either in association with Technics turntables or via a pushy friend or YouTuber enlightening them about the M50x headphones. Audio-Technica got its start back in the 1960s as a maker of phonograph cartridges — the company’s logo is an abstraction of the needle shape touching a record — and has always thought of itself as the provider of pro audio equipment, which over the years has included an unheralded role as the supplier of microphones for US presidential debates.

It was in 2007 that Audio-Technica made its unexpected breakthrough into mainstream awareness with the humble ATH-M50 over-ear headphones. As usual for the company, they were designed for professional use, however their indestructible build, reasonable price, and sharp, incisive sound were warmly received by people looking for something more hi-fi than the dominant Beats options. Seven years later, the company made the cable removable with the ATH-M50x, and this year — after more than 1.8 million M50 sales — Audio-Technica has freed its best-known product from wires with the ATH-M50xBT.

Keeping the same price and look as its predecessors, the M50xBT model is a form of fan service. Audio-Technica’s most common request from users has been a wireless M50x, and the company has tried to achieve that in a very literal way. The same engineer, Hiroyasu Suzuki, who developed the M50 and M50x was tasked with creating a matching wireless version that sounds the same as its wired forebears. But Suzuki and his team haven’t quite accomplished their task. Because the wireless M50xBT actually sound better.

Our review of Audio-Technica m50xBT 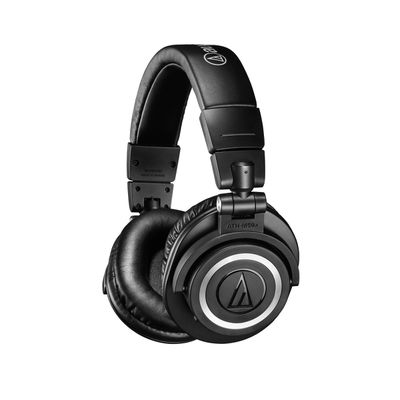 At first glance, you can tell that the Audio-Technica M50xBTs were designed for rough handling. They’re made of thick, hard-wearing plastic that has the chunky and reassuring feel you might get from an extra heavy-duty phone case. There are only a few slivers of metal in their design — inside the headband and as contrasting accents on the exterior — to break up the matte black monotony. These are certainly not pretty headphones, though their industrial look has a certain timelessness and conveys a “function over form” attitude.

The faux leather pads are replaceable and of a reasonable size, however they’re nowhere near as comfortable or accommodating as something like the Master & Dynamic MH40 or Sony’s class-leading 1000X M3s. Where those other headphones create a little chamber for your ear to reside in and breathe, Audio-Technica’s M50s make contact with the entire ear. That’s inevitably going to lead to discomfort and irritation over long listening sessions, and more than once I walked away from wearing the M50s with red, hot ears. With careful positioning and periodic adjustment, I think these headphones can offer a decent fit, plus they’re probably more forgiving for people with smaller ears. I do like their neat cluster of physical control buttons on the left cup, and the easily collapsible design is handy to have. But comfort is definitely not the M50xBTs’ strength.

Headphones that start the day with a double espresso

The thing that has me returning to these headphones on a daily basis is their sound. I was never really one of those people that fell in love with the M50x sound. It was too strident and aggressive for my liking, with a metallic sheen to its treble that lent an unearned harshness to the music. The new Bluetooth M50s hew pretty close to that formula, but they relax the sound just enough to be enjoyably lively rather than astringent and in your face. These are now headphones that start the day with a double espresso instead of a quadruple.

Miles Davis’ trumpet in Sketches of Spain is every bit as emotive as it should be when heard through the M50xBTs. The urgent high notes in “Concierto de Aranjuez” come through with a crisp and natural conviction. And these headphones really outperform their price when it comes to their presentation of the surrounding elements from the orchestra around Davis: each is rendered with its own distinct position and air to breathe. Nina Simone is similarly expressive through the M50s, with her “Do I Move You?” showing off the headphones’ organic quality in handling vocals, blues guitar, and a playful harmonica. The timbre of singers’ voices and acoustic instruments feels consistently on point.

Anyone worried that Audio-Technica tuned its headphones too closely to classical genres and music can relax. Switching genres to modern electronic music, I find the M50xBT headphones deliver all the delightful bass slam and wobble that Channel Tres’ eponymous EP calls for. Bass-starved headphones, these are not. It’s not the most refined or precise bass presentation, but it doesn’t have to be when you’re talking about headphones intended to be used on the move. In fact, the particular tuning of the M50xBTs is great for noisy environments: it puts an extra emphasis on the things that are usually dulled down by the din of a busy city around you.

As far as sound fidelity and realism are concerned, I’d rank the M50xBT comfortably ahead of Apple’s Beats Solo 3 and Studio 3 and, by a smaller margin, higher than the leading wireless over-ear headphones like the Sony 1000X M3, Bowers & Wilkins PX, and Bang & Olufsen H9i. You’d have to go all the way up to the $549 Audio-Technica DSR9BT to obtain meaningfully superior sound quality from a pair of wireless cans.

Over-ear wireless headphones in 2018 are expected to all have built-in active noise canceling (NC), which is something the M50xBT headphones lack. That leaves you relying on their passive noise isolation, which is decent: people near you will only be disturbed by your music at really loud volumes, and you’ll be able to reduce surrounding noise by popping these on your head. And yet, the difference between these and the 1000X M3s on a commute underground is significant. With Sony’s NC cans, I’m basically in my own undisturbed cocoon — if I put them on and close my eyes, I can escape the oppressive trudge. With Audio-Technica’s cans, I’m still there, within earshot of the droning train.

Compromises had to be made to fit under the $200 mark

Another disappointing omission with these headphones is the absence of USB-C charging. IFA in Berlin this September was a decisive illustration of seemingly the entire headphones industry biting the USB-C bullet and consigning the damnable MicroUSB to history. All except for Audio-Technica, apparently, which debuted its first truly wireless earbuds at that show, but not its first USB-C headphones. The reason we’re still waiting for that moment’s arrival, Audio-Technica argues, is that the M50xBTs couldn’t have made it under the $200 marker with USB-C on board. And with a claimed 40-hour battery life, these should be headphones you won’t have to worry about charging too often anyway.

In my three weeks of testing, I’ve only charged the headphones twice: once at the start, and the second time when I hit the low battery warning a few days ago. Audio-Technica is being optimistic with its 40 hours claim, but I got well in excess of 20 hours on a charge even with my habit of listening to music at high volumes.

Audio-Technica does embrace the modernity of our age by including a voice assistant trigger on its headphones, activating either Siri on iOS or Google Assistant on Android. This function is touch-activated and absolutely terrible. You have to hold a finger on the left ear cup for a small eternity, and then you get a laggy response from your phone as it turns on its assistant. I have a success rate of somewhere around 10 percent when trying to use this, and I haven’t yet been able to turn on Google Assistant with my Pixel 3 locked. What’s the point of a shortcut for activating your assistant if you have to bring up and unlock your phone first? By that point, saying “OK Google” would literally be faster, because of the delay on successful activations via the headphones.

On the plus side of the ledger, the microphone and wireless performance of Audio-Technica’s M50xBT are both praiseworthy. I carried out multiple calls while out on a noisy street with these headphones and in all cases I was heard with clarity and ease. I was also impressed by how far I could walk away from my music source with them while still keeping up a solid connection. In a particularly tricky spot for wireless connectivity in my apartment, where other Bluetooth headphones would cut out, the M50s are able to sustain an almost constant signal. Only Apple’s AirPods have been quite this good in my previous testing.

Audio-Technica’s M50xBT headphones support Bluetooth 5, AptX, and AAC, and though higher-quality standards like AptX HD and LDAC would have been nice to have, I’m not convinced they’d have made a massive difference in the sound quality on offer. Alas, these headphones also can’t accept connections from multiple devices at once, so I have to disconnect them from my desktop PC before reconnecting them to my phone and vice versa. Every time.

The truth about these headphones, whether Audio-Technica cares to admit it or not, is that they are a full step up from the M50x. Not only are the M50xBTs more convenient by being wireless, they also sound much friendlier to the ear. As far as Audio-Technica’s own range of headphones is concerned, this is a brilliant all-around upgrade that keeps the good while discarding some of the bad of its predecessor.

But in the broader wireless market that includes Sony and Bose’s excellent NC headphones; Bang & Olufsen and Bowers & Wilkins’ strikingly pretty cans; and the plethora of alternatives from the likes of Beyerdynamic, Sennheiser, Audeze, and even Grado now, the M50xBTs’ star doesn’t shine quite so bright. Audio-Technica’s wireless cans simply lack a number of desirable features, the absence of which can’t be entirely masked by their superb sound for the price.