A luxury price demands luxury build quality and performance, and MrSpeakers delivers on all fronts

There’s a black-and-gold Hi-Res Audio sticker that you’ll surely have seen many times by now. It often shows up on the boxes of cheap headphones because manufacturers want to give their products an extra sheen of performance claims. Certified by the Japan Audio Society, the Hi-Res Audio status is bestowed upon headphones and audio players that pass a technical test. In my experience, it has little to no correlation with gadgets that produce sound you can recognize as having high resolution. Hell, what does that even mean in the audio context?

Well, MrSpeakers’ latest top-of-the-line headphones, the Ether 2, have given me a handy opportunity to explain the notion of high-resolution (or high-definition) sound and why, despite many companies abusing the term, it’s not mere marketing speak. True high-res audio is an example of the thing that attracts us to follow the progress of personal technology: turning technical and engineering advances into a pleasurable experience. It doesn’t come cheap, and you’ll have to swallow hard to get over the $1,999.99 Ether 2 asking price, but after weeks of testing these headphones, I can tell you with certainty that they deliver something you won’t get anywhere else.

Our review of MrSpeakers Ether 2 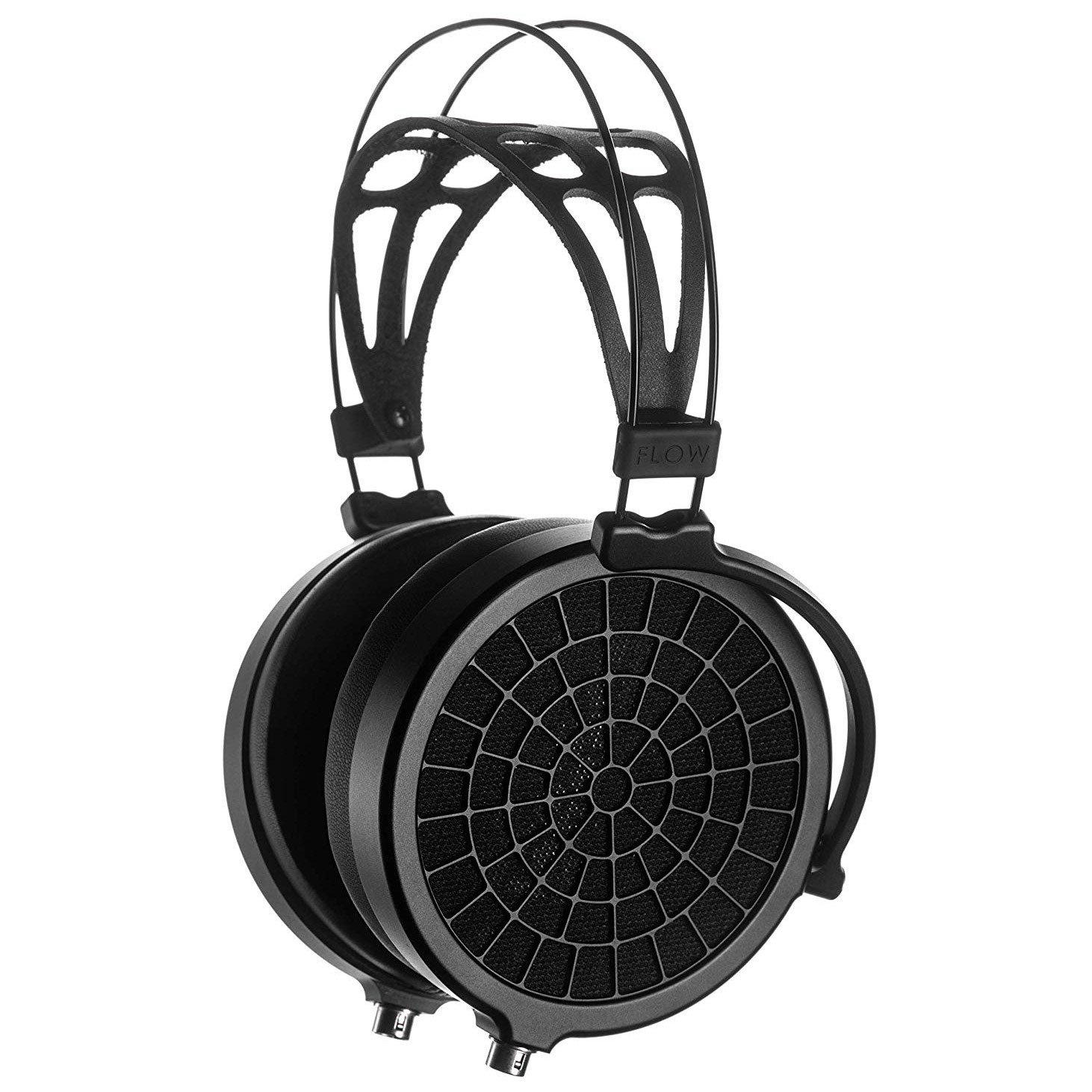 Most of us are used to thinking of resolution in relation to TVs and displays, and we judge it by reference to pixel density: smaller, more numerous pixels tend to produce the sharpest possible picture. Audio resolution doesn’t quite work the same way because there’s no “still” piece of audio; it’s all temporal. That’s why impulse response becomes paramount with sound reproduction: how fast does a headphone’s internal speaker or diaphragm return to a standstill after making a sound? All headphones have a measure of additional, unwanted ringing after playing a note (because physics), and the best ones exhibit their excellence by controlling that as much as possible.

Here’s why I find the MrSpeakers Ether 2s exceptional on this front. Their resolution is so damn exemplary that I initially thought they had a fault. Listening to music with them, I’d hear peculiar buzzing noises and ringing and imperfections that seemed to be missing from other headphones. I tried using a different cable (MrSpeakers is good about using the same connector across all of its headphone models to date) and different sound sources, and those little flaws and resonances were still there. Eventually, I took the pair to Dan Clark, the titular MrSpeakers, who’s the designer, engineer, chief marketer, and CEO of the company. Clark plugged them into his office setup, listened to the offending tracks, then flipped the left and right channels by plugging the cables into the “wrong” ear cup, and, sure enough, I heard the flaws in the music switch sides.

Simply put, the Ether 2s do such a clean job of reproducing the artist’s intentional musical creation that they leave air and time for some of the crap in the background to be heard as well. I struggle to believe I’m saying this, but they do so even better than Sennheiser’s HD 800 S, which have long been regarded (including by me) as the pinnacle of highly resolving, infinitely detailed headphones. So yes, I’m impressed, but MrSpeakers is charging more than Sennheiser does for its flagship open-back cans, so being better should probably be a baseline expectation rather than a surprise.

Aside from being superbly agile, the Ether 2s are also tuned with an expert ear. Neither their bass nor treble overwhelms any other part of the music, which goes a long way toward exposing everything that a certain recording has to offer the listener. They still have the deep bass extension required to fully re-create an album like Quarter Turns Over A Living Line by Raime, which is released by a label called Blackest Ever Black and is even darker in its tones than “The Long Night” Game of Thrones episode. If you want a sampling of diverse bass textures, haunting vocals, and sparse instrumentation, I recommend it. The Ether 2s convey all the unease that that recording is supposed to evoke.

Ludwig Goransson’s Oscar-winning Black Panther soundtrack has been one of my favorite albums lately, and it’s one of those records that most benefits from a high-end pair of headphones. It just has so much going on: contrasting sections of downbeat percussion, rousing orchestral moments, and vocals darting back and forth. You can hear it using any old pair of headphones, but the Ethers 2s and Audeze’s LCD-4zs are the only headphones that always make the hair on the back of my neck stand up when listening. That’s what audiophilia is ultimately about: do you get a thrill, a jolt, a moment of bliss, or an escape from your everyday concerns? With the Ether 2s, the answer is a reliable yes.

These headphones are the embodiment of good minimalist design: great materials used sparingly

The joys of the Ether 2s extend to how they are built as well as how they sound. Weighing 290 grams / 10 ounces, these are unprecedented in the ultra high-end headphones market. Most headphone companies feel the need to give you a lot of material for your big outlay of cash, with such monsters as the Final Audio D8000 coming to mind. The Ether 2s are almost as light as the amazing Audio-Technica R70x, and they have a similarly slimline profile. These are headphones with thousands of dollars’ worth of performance in the shape of something casual and lithe. The materials remain high end, though, with a metal frame around the ear cups, a carbon fiber driver baffle, and the same nitinol headband that can be twisted and turned in all sorts of ways and will still remember its original shape. As to creaks, there are literally none. Zero.

I can go an entire day with the Ether 2s on my head without worry or discomfort. The pads are lovely, soft, and enveloping, and the webbed leather strap at the top is light enough to be forgettable. “Forgettable,” according to Clark, was a design goal for these headphones, and the sheer minimalism of their final form speaks to that as a priority. The Ether 2s have the best design of any high-end headphones I’ve yet tested (and I’ve had practically all of them on my head, at some point or another). MrSpeakers has achieved a level of comfort and build quality that really speaks to the luxury price of the product. And as usual for the company, there’s a contoured carrying case for storing and transporting the Ether 2s.

Conscious that this has been mostly a slalom through positives, let me address the few downsides of the Ether 2 directly. First, you’ll absolutely need a powerful amp to get the most out of these cans. MrSpeakers’ planar magnetic technology has been improving, but it still requires plenty of power to achieve its full potential. I’ve been using the Ether 2s primarily with a Schiit Jotunheim, which is just about adequate, but these headphones have vast reserves of headroom to scale up with beefier components. In short: if you buy the Ether 2s, you’re committing to also acquiring a music source system that’s of comparable cost. Like a fancy car with a fat insurance bill, this is a luxury item that requires additional expenditure beyond its sticker price.

Equally important is the issue of whether you actually want all that resolution. Some of my favorite artists are young bedroom producers, people who make music with headphones that barely cost $200, never mind $2,000. The Ether 2s don’t do their creations many favors, and there’s plenty of pop and electronic and hip-hop music that, I’m sorry to say, benefits from the smearing effects of more distorted headphones. In the same way that you might not want a 4K, 50-inch closeup of an aging actor’s face, it might be the case that you won’t much enjoy hearing most modern, dynamically compressed music. At the same time, that 4K TV is pretty great to have for nature documentaries, and the Ether 2s are equally outstanding when you put some well-recorded acoustic or classical music through them.

The MrSpeakers Ether 2 are simple. They’re priced like a luxury product and they work like a true luxury product. It’s up to you decide exactly how much you want to spend on a system of electrified magnets that drives a diaphragm to feed vibrations into your eardrum, which are then interpreted into little packets of euphoria and sent up to your brain. All I can say is that the Ether 2s are a great one of those.