﻿ Jabra Elite 85h review: like the rest, but not the best - The Verge Skip to main content

Jabra Elite 85h review: like the rest, but not the best

Jabra’s head is in the right place, but a few flaws keep it from greatness

Jabra’s Elite 85h are worth considering for many of the same reasons you might want Sony’s 1000X M3, Bose’s QC35, or one of the other models in our roundup of the best wireless headphones. They’re good at silencing distractions with noise canceling (NC), they fit comfortably for hours at a time, and they’re simple to pair and use.

It’s a nearly complete package that’s spilling over with other appealing features like SmartSound, Jabra’s intelligent preset-switching function that automatically adjusts to ambient noise, and excellent battery life that outperforms its competitors. All that’s missing is fantastic sound, and for me, that’s a deal-breaker.

I can’t ignore that Jabra’s latest over-ear model is a fantastic value. Sony and Bose dominate the conversation surrounding wireless noise-canceling headphones, but Jabra’s pitch is well worth listening to.

Our review of Jabra Elite 85h 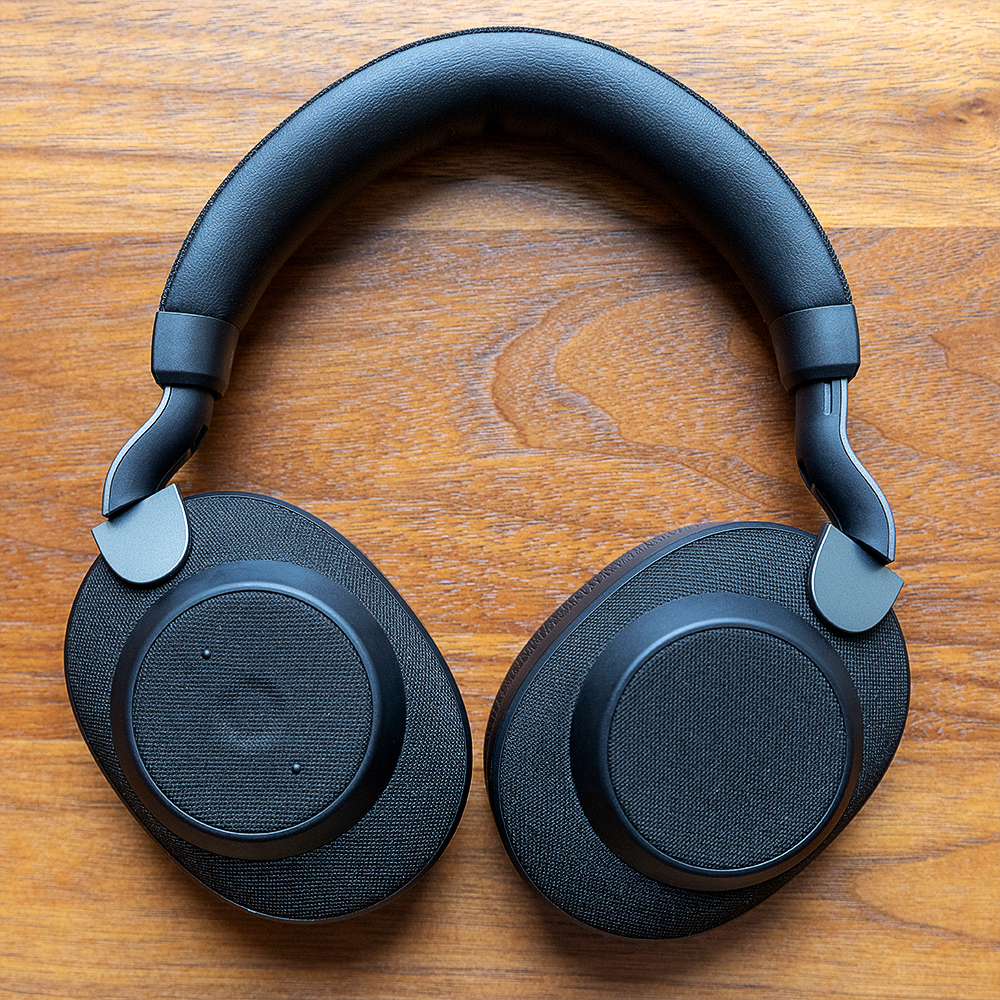 Jabra’s biggest accomplishment here is its battery life. The Elite 85h meet the company’s claims of up to 30 hours of life with noise canceling (NC) switched on. That’s the same target that the Sony 1000X M3 aim for, but Jabra’s headphones seem to last a bit longer. Our review unit lasted nearly a week without needing to be charged, and its auto-pause feature likely played a role in that. Also, since turning them off is as easy as twisting the ear cups — an action I always perform when I take off over-ear headphones — that probably saved some battery, too.

The Elite 85h are bulkier than I’d prefer for personal use. If possible, I prefer not to be wearing the biggest set of headphones in a crowd, but with these on in the subway, that distinction goes to me. Thankfully, their size doesn’t impact how comfortable they are to wear. At 40 grams heavier than the 1000X M3, the difference may be noticeable in the hand, but not when they’re on my head. The headband, lined with a faux leather material on the bottom, is comfortable, and importantly, it’s not going to budge once you set the size that works for you. I’ve worn these for the past few weeks and I haven’t had to readjust or take them off due to discomfort.

Jabra’s ear pads, also covered in a leather-like material, clamp down just enough to create a good seal. They’re not as breathable as I’d like, but that’s more of a complaint about the over-ear, closed-back form factor in general. My ears are on the small side, but even so, the interior of the pads doesn’t allow for much wiggle room. So, if possible, I’d advise that you try these before you buy them. (Or make sure the retailer that you’re buying from allows for returns.)

If you’ve been put off by the all-plastic look of most popular over-ear models, you might like Jabra’s woven fabric look. The fabric on the ear cups and headband is implemented well and feels smooth to the touch, but it’s hard to know how gracefully it will age after exposure to the elements, or taking the headphones out of your bag for the umpteenth time. Jabra includes a hard zip-up case with the 85h, which is helpful for preserving them. But with or without the case, they’re pretty easy to tote thanks to the swiveling ear cups and articulating headband.

Design-wise, these Jabra cans do a few clever things that I wish my Sonys could do. The ear cups can swivel to sit flush with your chest, and doing so automatically turns off the headphones. And if you suddenly need to pull the Elite 85h off your head, whatever you’re listening to will pause, then resume when they’re back over your ears.

Most people will be happy with how the Elite 85h sound, but I prefer a warm, bass-forward sound, which is something that Jabra’s new headphones don’t provide. They sound a little colder compared to my Sony 1000X M3, and the finer details that I usually notice in my favorite songs tend to get muddled. I expect to be wrapped in sound when I put on over-ear headphones, but the 85h leave me wanting more.

Jabra’s Sound Plus companion app lets you create your own equalizer preset (complimenting five premade options), but even my best attempt at making a satisfactory EQ doesn’t change the fact that these lack the punchy, encompassing, detail-rich quality that won me over when I tried the Sony 1000X M3. Comparatively, my music through the 85h sounds distant and flat, like I’m stuck watching the concert from the ticket counter instead of being among the crowd, washed over with detail and warmth.

Jabra’s NC effect is more impressive. Screeching subway cars and honking taxi cabs are hushed by the Elite 85h, and anything that’s less of an assault to your ears is, of course, dampened even more. I like to drum, so NC is more of a necessity than a nicety for me. I’m able to tell the quality of the effect by the volume that I have to adjust the headphones to while I do my drumming. These do a good job of keeping my cymbal splashes and most everything else I’m doing to a minimum, allowing me to keep up with the music without cranking up the volume too high. I still don’t think Jabra’s NC is as good as Sony’s, which is almost dangerously effective at blocking sound, but I’d be happy to bring these to the practice studio.

Beyond customizing the EQ, the Sound Plus companion app lets you turn on SmartSound, a feature that uses the headphones’ microphones to automatically adjust what Jabra calls “Moments,” three EQ and NC presets based on your surroundings. If you let it take the wheel, it will shuffle between “In Public,” “In Private,” and “Commute” depending on what it hears. How it works for you will depend on what sort of auditory extremes you’re exposed to, and in my experience commuting in NYC, it frequently succumbs to false positives.

At my desk, the app decides to adopt the “In Public” setting. When I go outside into the busy streets, it remains “In Public” until something very loud, like a bus, drives by. That sound tells the software to switch to “Commute” mode, since it thinks I’m on a bus. Understandable, I first think, until it enables the “HearThrough” feature, which I have set to trigger in this mode. Ideally, I want to be able to hear chatter, and the subway announcer over my music, not a roaring engine on the street.

The system is occasionally accurate and good to have, like when it switches from “In Public” to “Commute” when I move from the subway platform to inside a train. I’ve yet to have the app automatically switch to “In Private” mode, though, which might be a telling sign that there’s too much noise pollution in my life. But regardless of its success rate, I prefer to use the button found on the left ear cup’s side to do all of this myself. Tapping it toggles between NC and “HearThrough,” while holding it for a second will cycle through each of the “Moments,” just like the SmartSound feature, but manually.

Jabra has never been keen on touch controls, and you won’t find them on the Elite 85h. In their place are a host of buttons, most of which are on the right ear cup. Even though you can pause and resume music by removing the headphones, there’s a concave button that performs the same function. It’s flanked on top and bottom with raised, rubberized nibs that adjust volume or, if you hold them, they can skip or reverse tracks. You’ll find the smart assistant button around the rear of the right ear cup, and you can chat with Siri, Google Assistant, or Amazon Alexa once you configure it through the companion app. You can use this button to compose messages with your voice, set appointments and alarms, check the weather — you know, smart assistant stuff.

Bad swipe controls, and most of them are bad, can spoil an otherwise excellent set of headphones. The Sony 1000X M3 are a good example of this, as they can misunderstand touch commands or misfire in the cold. The one good thing about touch is that when it works, it’s almost effortless. Jabra demands a bit more focus: to change a song, you need to click and hold one of the raised buttons on the right ear cup for a second. It feels a little more cumbersome and I don’t like the feeling of squeezing the Elite 85h any closer to my head. Though at least its buttons won’t fail me in the winter.

I feel comfortable suggesting Jabra’s Elite 85h to anyone who has $300 to spend, but not without a major caveat: Sony’s $349 1000X M3 offer superior sound quality, and they hit on most of the same beats, with their almost-as-good battery life and better NC. Plus, they sometimes cost less than $300.

Even with unrefined sound quality, the Elite 85h offer the best battery performance I’ve seen in over-ear headphones, they have competent NC, and their ear-cup-twisting mechanism to power down is darn handy to have. I’d like to see Jabra put more focus on improving sound quality and shrinking down the design to make its next over-ear model a little less bulky. Pairing improvements like those with all that the Elite 85h get right would likely make for an awesome set of headphones.