They’re hard to beat, provided you never have to rely on their bad microphones

True wireless earphones are going through an absolute revolution in 2019, with battery life increasing prodigiously and prices dropping precipitously. Cambridge Audio’s first entry into the category, the Melomania 1, is a great example of this trend, coming in at $129.95 while boasting nine hours of battery life in the buds plus an incredible 36 additional hours in its diminutive AirPods-like case. I’ve been testing the Melomania for a couple of weeks, and I still haven’t had to recharge their case.

Verge readers might remember Cambridge Audio from my review of the DacMagic XS, a tiny USB DAC and amplifier that functions essentially like an external sound card for PCs. But the company has a much deeper and longer history than that, with 50 years of audio engineering experience that spans speakers, amps, AV receivers, and even a wired pair of earphones. With the future very much headed in a wireless direction, the Melomania buds come just in time to carve out a new niche for Cambridge Audio.

My expectations of these buds were not super high. They have a Micro USB charging connection, which I’ve been urging against since the end of 2017, and they’re priced keenly enough to sell on their big battery life claim alone. So long as they can play any sound at all, you’d think, plenty of people would buy them just for that long endurance. But Cambridge Audio has done plenty of good work beside the great power efficiency, as the Melomania have impressed and surprised me along a number of fronts beyond their battery.

Our review of Cambridge Audio Melomania 1 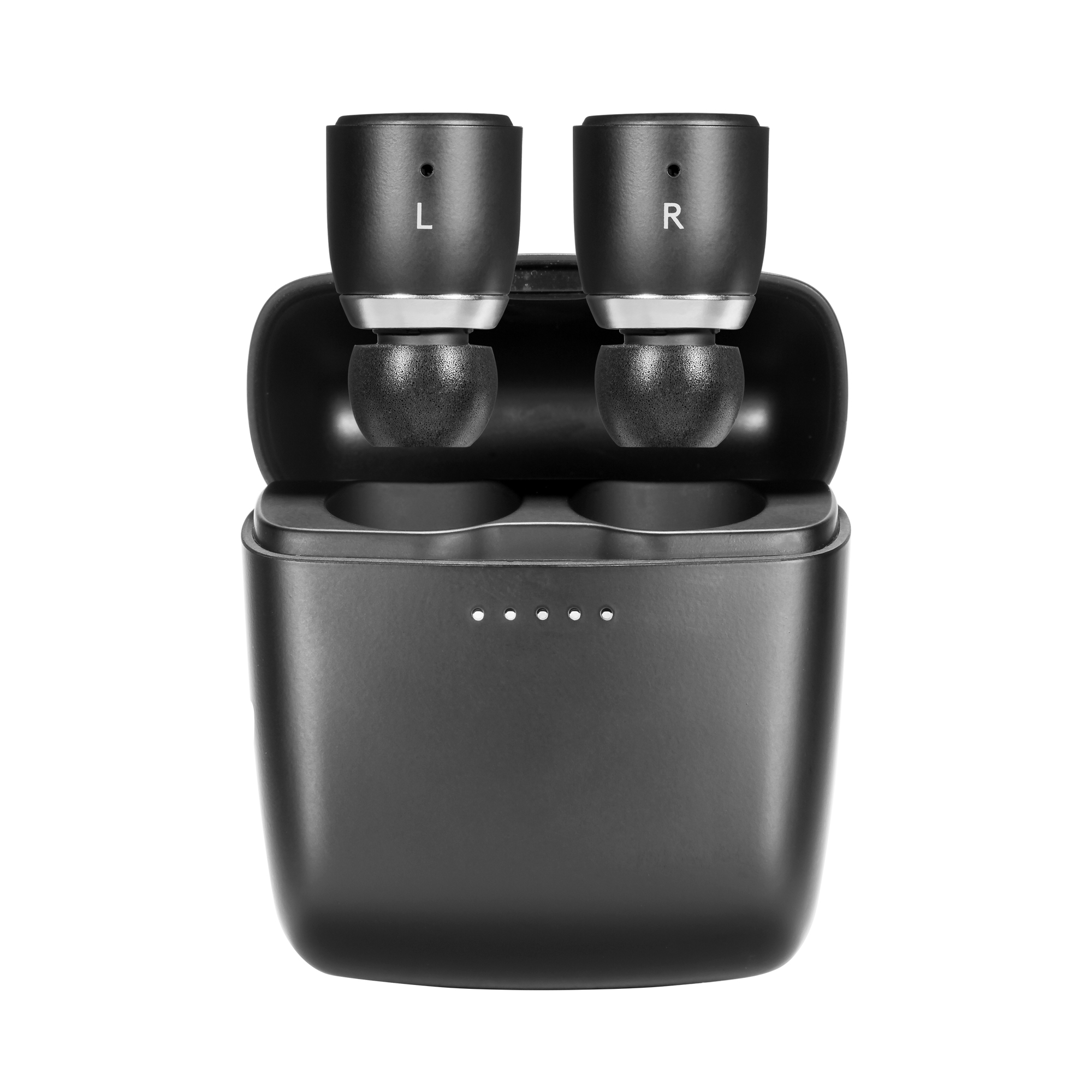 Firstly, their case. This is the best earphones case I’ve come across outside of the one Apple has crafted for the AirPods. The Melomania case is only marginally larger while fitting in many more hours of extra charge. It has the same clicky snap to its top cover as you get from the AirPods, and I find myself absent-mindedly opening and closing it in the same fashion as I do with the Apple alternative. There’s just a great tactile quality to both products, and both are incredibly rigid and sturdy. I appreciate the strong metal hinge and the magnet that Cambridge Audio uses, and the five LEDs at the front give me an indication of the case’s charge level anytime I crack it open.

The buds themselves have a unique design. Each is a rotund cylinder, entirely symmetrical and making no ergonomic accommodations, and they appear to charge via a metal strip that sits like a belt around their midsection (so no Pogo pins required). I’d describe their fit as very hit-and-miss: I’m able to find a comfortable way to tuck them into my ears, but my friends have found their blocky shape to be unnatural and a little weird to wear. I wouldn’t say the Melomania ever cause discomfort, but they’re far from the effortless comfort of something like Samsung’s Galaxy Buds.

The flat exterior of each earphone is a multifunctional button, framed by an LED indicator light that looks like a little halo. I like both, as I’ve seen too many good headphones spoiled by bad touch controls, and the lights are elegantly integrated.

My biggest surprise came when actually listening to the Melomania, which are really rather good. This starts with good sound isolation, as the Melomania are vastly ahead of Apple’s AirPods when it comes to turning down exterior noise. With these buds, I can still hear things around me and be aware of my surroundings, but I also get a much better sense of the music I’m listening to while walking through busy city streets.

The soundstage, clarity, and tonal balance that the Melomania provide are all better than usual for true wireless earphones. There’s no bloated low end or excessively sparkly highs to speak of, and everything feels coherent and in balance. Voices sound natural and guitars sound like someone’s plucking at their strings. This isn’t to suggest that the Melomania are any sort of high-fidelity, audiophile-grade hardware, because they’re not. They have their limitations, and they do garble up the occasional bit of fine-grained detail. But even without reaching new pinnacles of audio perfection, they are just a very easy listen that reminds me of Apple’s AirPods: not hi-fi or exceptional, but highly enjoyable.

Cambridge Audio has also taken care of the wireless performance of the Melomania, which maintain a flawless connection with both iPhones and Android devices. The buds support Bluetooth 5 and AptX, AAC, and SBC. They have plenty of range, too, so you should be able to roam to the office coffee maker and back without necessarily having your phone in your pocket. It’s just great peace of mind to not have to fret about avoiding interference with your headphones’ wireless signal.

There’s one thing that’s terrible about these earphones, however, and that’s their microphone performance. Even in a quiet room, the Melomania make me sound like I’m calling from the middle of an electric storm somewhere far away. My MacBook Pro’s humble built-in mic totally embarrasses the Melomania’s, and Apple can rest assured that its AirPods’ excellence for taking calls will not be challenged by Cambridge Audio. In short, the Melomania are for listening only, with the mics to be used only in the direst of emergencies or to bark orders at Siri or Google Assistant, depending on your connected device.

As to that big battery life claim, I can’t verify it entirely because I just can’t get to a situation where I listen to true wireless buds like the Melomania for a full nine hours at a time. The only time I heard their “battery low” audio cue was when I first tried them and they weren’t charged. What this means in practice is that these buds will cover you for the vast majority of listening scenarios, and their case provides a reassuring top-up as well.

I’m willing to forgive the Melomania’s Micro USB charging port when their case makes charging such a rare necessity. I can see myself going on week-long work trips without ever carrying a Micro USB cable with me, trusting that the Melomania will have enough juice by themselves. And the obvious upside to the omission of USB-C is that it’s helped Cambridge Audio keep the price of the Melomania below that of the AirPods, which is frankly essential for anyone trying to compete with Apple’s much better-known product.

There are really only two downsides to the Melomania, but they’re major ones. The ergonomics of these buds are rather lacking, and their microphone performance is garbage-tier. On the other hand, if you’re able to find a good fit, as I have, and you don’t particularly need or care for a good mic, these are pretty great. They eliminate range or endurance anxiety for anyone reluctant to get into true wireless buds yet, they have a very attainable price, they’re built well, and they come with a terrific little case. Imperfect, but still highly appealing.